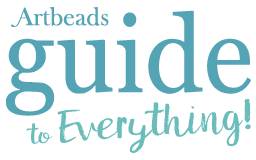 At Artbeads.com we have weekly sales and promotions. Often times, our sales do not require a coupon to take advantage of the savings. During these types of sales, items that qualify for the sale are already reduced or discounted. You can view the original pricing in green font, while the discounted price is in red font. We also offer coupon savings. Coupon savings exclude all Artbeads Rewards items in addition to gift cards and gift certificates.

We have prepared this sales tax policy statement to explain to you when and why we collect sales tax on your purchases.

Even if we do not collect sales tax from you, you may owe sales tax on your purchase. Unless you live in Alaska, Delaware, Montana, New Hampshire, or Oregon, your state most likely requires purchasers to report and pay tax on all purchases that are not taxed at the time of sale. The tax may be reported and paid on your individual income tax return or by filing a consumer use tax return. For more information, please visit your state's department of revenue website.

ARTBEADS.COM COLLECTS SALES TAX in states where we have physical presence (or nexus), including Washington and Idaho.

ARTBEADS.COM ALSO COLLECTS SALES TAX in any state that is a member of the Streamlined Sales and Use Tax Agreement (SSUTA) or states that have required ARTBEADS.COM to do so.

For Our Tax-Exempt Customers

ARTBEADS.COM DOES NOT COLLECT SALES TAX if we have your exemption certificate on file.

NO PURCHASE OR PAYMENT OF ANY KIND NECESSARY TO ENTER OR WIN CONTESTS. CONTESTS OPEN TO ELIGIBLE LEGAL RESIDENTS OF THE FIFTY UNITED STATES AND THE DISTRICT OF COLUMBIA. OPEN TO CANADIAN RESIDENTS (EXCLUDING QUEBEC).

1. ELIGIBILITY: Artbeads.com Contests are open only to legal residents of the fifty (50) United States (including District of Columbia) and Canada (excluding Quebec) who are at least eighteen (18) years old at the time of entry. VOID IN U.S. VIRGIN ISLANDS, U.S. TERRITORIES AND POSSESSIONS AND WHERE PROHIBITED. Employees of Artbeads.com, and their parent and affiliate companies, suppliers as well as the immediate family (spouse, parents, siblings and children) and household members of each such employee are not eligible. Subject to all applicable federal, state and local laws and regulations. Participation constitutes entrant’s full and unconditional agreement to these Official Rules and Sponsor’s decisions, which are final and binding in all matters related to the Promotion.

2. PROMOTION PERIOD: The Promotion begins on or about the designated date and time featured on social media promotions. Sponsor (or its authorized representative’s) computers/server will be the official time keeping device for all matters related to the Promotion. All time referenced is Pacific Time.

4. Entry: Entrants are not required to: (a) purchase goods or services, (b) pay any money, or (c) submit to a sales promotion, to be eligible for the Promotion. All required steps specified herein and on the Site is referred to as the “Entry”. Once the Entry is completed and submitted as directed by the online instructions, you will receive one (1) Entry in to the Promotion. Limit one (1) Entry per person per e-mail address.

5. DRAWING: On or within five (5) working days following the end of the Promotion Period a random drawing will be held by Sponsor (or its authorized representative) to select potential winners from all eligible entries received during the Promotion Period.

6. PRIZE, ODDS and NOTIFICATION: Odds of winning depend on the number of eligible entries received during the Promotion Period. In no event will Sponsor be responsible for awarding more than the stated number of prizes. Winners will be notified by Artbeads.com via social media or email and must respond within forty-eight hours to claim their prize and provide their name and mailing address. If the Winner fails to respond within forty-eight hours the Winner will forfeit the prize and prize will be awarded to an alternate winner. Winners may be required to present proof of identification prior to claiming prize. The prize will be shipped to the address supplied by the winner.

7. GENERAL RULES: By participating in the Promotion, entrants agree to abide by and be bound by these Official Rules and the decisions of the judges, which are final and binding in all matters relating to this Promotion. No substitution, cash redemption or transfer of prize by winner permitted, other than those stated herein. All federal, state and local taxes are the sole responsibility of winner. All federal, state and local laws and regulations apply. Sponsor will report value of prize as required by law. All materials submitted become the property of the Sponsor and will not be acknowledged or returned. Return of any prize/prize notification as undeliverable will result in disqualification and an alternate winner may be selected. In case of unavailability of any prize, Sponsor, in its sole discretion, reserves the right to substitute prize of equal or greater value. Sponsor is not responsible for the quality or utility of any prize or any portion of prize. Sponsor makes no warranty with respect to any portion of prize. By accepting prize, winner consents to the use of his/her first name, photograph or likeness for publicity or advertising purposes without further compensation or permission, except where prohibited by law. By participating, entrants agree to release and hold harmless Artbeads.com, their parents, subsidiaries, affiliates, directors, officers, employees and agents (collectively, the “Released Parties”) from any and all liability with respect to or in any way arising from or in connection with this Promotion and/or acceptance or use of the prize, including liability for personal injury, bodily injury, death, damages and/or loss. Winners assume all liability for any injury or damage caused, or claimed to be caused by participation in this promotion or use or redemption of any prize. The failure of the Released Parties to comply with any provision of these Official Rules due to an act of God, act of domestic terrorism, hurricane, war, fire, riot, earthquake, terrorism, act of public enemies, actions of governmental authorities outside of the control of either (excepting compliance with applicable codes and regulations) or other force majeure event will not be considered a breach of these Official Rules. The Released Parties are not responsible for any typographical or other error in the printing, the offering or the announcement of any prizes or in the administration of the promotion.

8. LIMITATIONS OF LIABILITY: The Released Parties are not responsible for: (i) technical failures of any kind, including but not limited to the malfunctioning of the website, or any computer, cable, network, hardware or software, delay in operation or transmission, communications line failure, technology outage, theft or destruction or unauthorized access to, or alteration of entries, whether caused by the sender or any of the equipment or programming associated with or utilized in the Promotion; (ii) the unavailability or inaccessibility of any transmissions or telephone or Internet service; (iii) unauthorized human intervention in any part of the entry process or the Promotion; (iv) electronic, clerical or human error which may occur in the administration of the Promotion or the transmission, receipt or processing of entries or notification of winners; or (v) any injury or damage to persons or property, including but not limited to entrant's computer, hardware or software, which may be caused, directly or indirectly, in whole or in part, from entrant's participation in the Promotion. Without limiting the generality of the foregoing, Sponsor reserves the right, in its sole discretion, to terminate, modify, cancel or suspend this Promotion if fraud, technical failures including any network server or hardware failure, viruses, bugs, errors in programming, or any other errors or other causes beyond the control of Sponsor corrupt the administration, security, or proper play, of the Promotion. In the event of any cancellation, termination or suspension, notice thereof will be posted at the Site and the determination of the applicable winner will be made, if practicable and reasonably commercially feasible, from among all eligible, non-suspect Entries received during the Promotion Period as of the date of the termination, cancellation or suspension, as Sponsor determines in its sole and absolute discretion. Under no circumstances, including negligence, shall the Released Parties be liable for any direct, indirect, incidental, special or consequential damages that result from the use of or inability to use the web site, or out of any breach of any warranty. This exclusion or limitation of liability will not apply to the extent that any applicable statute prohibits such exclusion or limitation of liability. WITHOUT LIMITING THE FOREGOING, EVERYTHING ON THE SPONSOR’S PAGE IS PROVIDED "AS IS" WITHOUT ANY WARRANTY OF ANY KIND, EITHER EXPRESS OR IMPLIED, INCLUDING BUT NOT LIMITED TO, THE IMPLIED WARRANTIES OF MERCHANTABILITY, FITNESS FOR A PARTICULAR PURPOSE OR NON-INFRINGEMENT. SOME JURISDICTIONS MAY NOT ALLOW THE LIMITATIONS OR EXCLUSION OF LIABILITY FOR INCIDENTAL OR CONSEQUENTIAL DAMAGES OR EXCLUSION OF IMPLIED WARRANTIES; CHECK YOUR LOCAL LAWS FOR ANY RESTRICTIONS REGARDING THESE LIMITATIONS OR RESTRICTIONS. Any attempt by an entrant or other individual to deliberately damage any web site or page or undermine the legitimate operation of this promotion, including but not limited to any fraudulent claims, may be a violation of criminal and civil laws. Should such an attempt be made, Sponsor reserves the right to seek remedies and damages from any such individual, to the fullest extent permitted by law, including criminal prosecution. Sponsor’s failure to enforce any term of these Official Rules shall not constitute a waiver of that provision. Entrant engaging in any of the foregoing activities may be disqualified and will forfeit any prizes won.

9. PRIVACY/USE OF PERSONAL INFORMATION. Participants acknowledge and agree that any information collected in connection with this Promotion may be used by Sponsor for market research and only in accordance with the Artbeads.com privacy policy located here, and will not be shared with other organizations for commercial and other purposes. Once received, all entries and any optional submissions of comments or suggestions will become property of Sponsor, and none will be returned.

10. WINNERS LIST OR OFFICIAL RULES REQUEST: For the names of the winners or a copy of the Official Rules (designate which), send a self-addressed stamped envelope in a separate first class stamped envelope to: Artbeads.com Contest Winners List or Official Rules, 11901 137th Ave. Ct. NW Suite E-2, Gig Harbor, WA 98329, to be received within 30 days of the official end date of the Promotion.